Mark Charles is right: it is time to put the dysfunctional settler constructs in the past.

Here's an example of "weak with a history of malicious" among (and therefore bound to haunt) the cartel of settler-founded, and criminal Realtors and all of their associates:

A member of the Realtor cartel committed VEHICULAR MANSLAUGHTER ( Yes, the Realtor intentionally sought to literally kill the homeless person with their vehicle. In front of a church. )

This is a CRIMINAL OFFENSE, not civil: https://www.krqe.com/news/local-real-estate-agent-accused-of-intentionally-hitting-man-with-car

ALBUQUERQUE, N.M. – Family of the man who Albuquerque realtor Chris Pino is accused of running over is now suing.

The complaint for wrongful death claims Pino intentionally hit a man with his car, but the attorney defending Pino in the criminal murder case ..."

The attorney working on behalf of the family to bring the wrongful death to justice said:

Hey, I have a question:

To collaborate / hire union (the kinds of good people encouraging, helping, or otherwise in favor of workers' unions) ... especially when maybe dealing with different trade unions each proficient in their most preferred skilled trade ... what are some good ideas?

Our original version of Ecosteader had a setup like this to try to help workers localize (e.g. not have to do excessive fossil fuel commutes for jobs when qualified workers are available locally)

The "ws standard" we want to avoid is devaluing everyone like minimum wage does ( as ws have been and continue to be in denial of their own status as immigrants and unwelcome overstayers, they'll find out what it's like to be on the other end of that soon enough ).

Companies in the 70's, 80's and 90's organized around highly exploitative going concerns that should have been shut down long ago (or stayed shut down).

"It's long past time for Portland, a city with a history of institutionalized racism, to move aggressively toward equity, Hardesty and others say."

"It's a local version of the Green New Deal proposed in 2019 by U.S. Rep. Alexandria Ocasio-Cortez (D-N.Y.). It's also part of a larger political effort to reshape who calls the shots—and who benefits."

The new tax, created by a 2018 ballot initiative city voters passed by an overwhelming margin, is part of a power shift that saw two outsiders—Chloe Eudaly in 2016 and Jo Ann Hardesty in 2018—defeat establishment candidates for seats on the Portland City Council."

We're offering an award (guaranteed) of $575 USD for the artist who designs a new "Decolonized" logo for Ecosteader. With our new, more articulate mission as a B Corp., we're honing our mission to be of maximum impact in spreading Traditional Ecological Knowledge, or #TEK.

If you are from 99 designs, visiting the site for ideas on your logo design (login not required but you are encouraged to join!), please search the hashtags on the "More About Us" main page to see the topics.

The infographic included here shows an example of TEK as 1000X better for all inhabitants of an ecosystem than manmade broken, polluted ideas that have been poisoning America since the Industrial age began.

"N’we Jinan, whose name means "We Live Here" in James Bay (Eastern) Cree, is a non-profit organization founded in 2014 and registered nationally in 2016.

It began as a platform for participating youth to learn about and acquire skills in sound recording, music production, songwriting, and performance. Through the use of a mobile studio, original songs are created that center on themes of cultural identity, language, struggle, love, and self-acceptance. To date, more than 500 First Nations youth have participated across 40 communities, resulting in 80 songs and videos that have been viewed more than 15 million times online."

> "as a species, we are capable of making enormous, far-reaching changes."

How's this for a retort:

"The white supremacy species never changed (afawk) because it was sent out of our orbit long ago. More likely than not, those who've been proven to genocide kill races, as far as we know, have an eternally failing race condition."

Hey, I have a question:

To collaborate / hire union (the kinds of good people encouraging, helping, or otherwise in favor of workers' unions) ... especially when maybe dealing with different trade unions each proficient in their most preferred skilled trade ... what are some good ideas?

Our original version of Ecosteader had a setup like this to try to help workers localize (e.g. not have to do excessive fossil fuel commutes for jobs when qualified workers are available locally)

The "ws standard" we want to avoid is devaluing everyone like minimum wage does ( as ws have been and continue to be in denial of their own status as immigrants and unwelcome overstayers, they'll find out what it's like to be on the other end of that soon enough ).

Companies in the 70's, 80's and 90's organized around highly exploitative going concerns that should have been shut down long ago (or stayed shut down).

Because anyone who loves the Arctic should care:

The recall to get Dunleavy to stop brutally murdering Alaska? Yeah, it's working. So many prayers answered.

He'll be out; that much is obvious. Though the expediency of this removal? That cannot be emphasized enough. )

“This is a question for the voters, and the constitution makes that very clear”
"

He is no match for the kind of transparency Alaska knows. The only monsters in Alaska talk and look and dress just like him.

The ousting of all these men should happen at once!

Every day I tell this little guy how much I love him.

Please ask me questions about service dogs. I love dogs, and I love service dogs :3 It's cool whether you need one, think you might need one, or are just vaguely curious about them and their handlers. I love all the questions 💚 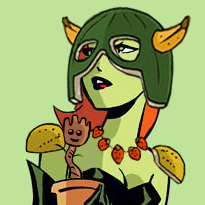 Some unsolicited advice on growing sprouts! 🌱🥗💚

@emsenn You can. But botanists typically use a 40% ethanol solution to sterilise seed coats for agar plates.

Welcome to the #Republic of Landlords, whose greed for money causes people to move around and live such a transient, disposable life that they have to throw away half of their belongings every time they move?

Yeah, that's partially it, but people are just fucking stupid.

There is an equal-sized dumpster with mixed recycling options for paper, plastic, and metal literally 3 feet away from this dumpster.

What a sickening and disgusting, disgusting sight, eh? Portland is not as great of a place as I thought it was. Its suburbs are much smarter.

Showing also the "wall of text" excuses the spokesperson paid by the landlord company sent me when I asked about composting.

May their "equities" and souls burn in overflowing dumpsters like these, forever inhaling the toxic fumes of their own willful ignorance.

The temperature differentials are clashing in longer strides.

Likely too dangerous to fly? Turbulence among these currents will probably be especially unpredictable.

"Temperatures have been running as much as 20 to 30 degrees or more above normal in most locations east of the Mississippi River, creating dozens of record highs."

"More than 267,000 customers between Arkansas and Ohio lacked power Saturday evening, according to poweroutage.us, which aggregates information from hundreds of electric utilities.

With roughly 300 total reports of severe weather (damaging winds, hail or tornadoes) thus far, it is the largest severe weather event of 2020 to date, and the most significant since an outbreak in December across much the same region."

Some #TEK and a 2018 report from an 11 member tribal collaboration with GLIFWC about threatened species in the Great Lakes region.

"Various concerns regarding waawaashkeshi were mentioned during the interviews, with most of them focusing on the health of the animals. A tribal member referred to waawaashkeshi as a canary in a coal mine–when waawaashkeshi health and population declines, its habitat is not healthy. The recent rise in chronic wasting disease (CWD) and contaminates such as lead are directly impacting the harvest of waawaashkeshi. It was also noted that there seem to be more cases of CWD in southern Wisconsin, which a tribal member feels is due to the waawaashkeshi not having access to the proper plants (such as northern white cedar and Canada yew) to medicate itself and a loss of their habitat due to logging. One tribal member estimates that the waawaashkeshi herd in northwestern Wisconsin has decreased 50 percent between 2010 and 2015."

Chin'u uk Wa'_ Attitude, it seems, requires more advanced thinking than most settlers are capable of mustering. They haven't the patience; and their faulty ideas about "insurance" claims indicates they never will.

EARTH
WILL NOT SUSTAIN
WHITE SUPREMACY

"When they already had
SO MANY
WARNINGS
the timeout so long!"

#IdiotRepublicans in Congress made their greed apparent with their bill designed to put salmon into extinction; #EcoWatch (reported in 2018): "House Resolution 3144 seeks to overturn multiple federal court decisions that protect endangered salmon and steelhead." Kawahara, an Alaskan fisherman said, "We expect our elected officials to bring people together and work on solutions... instead, we get this divisive bill that locks in failure and conflict. HR 3144 will have a devastating effect on salmon and our region's salmon-fishing sector."

"From populations numbering 130,000 fish in the 1950s, wild Snake River spring Chinook salmon dropped to approximately 5,800 in 2017. Thirteen populations are listed under the Endangered Species Act, and all four salmon and steelhead populations in the Snake River Basin are at risk of extinction, according to NOAA Fisheries. The dwindling number of salmon is having ripple effects across the food chain. In Washington State, only 73 Southern Resident orcas remain, due in part to the lack of Chinook salmon, their main prey."

Washington state finally appointed a Native American justice to the state Supreme Court for the first time, since its founding in 1889. Wow.

The conversation about how to stop systems perpetuating via bias is important. Watch her talk about it:

“We can’t undo all of that, but we can be conscious that it exists,” she said. “The conversation is important.”

Prepare to be woke:

"Montoya-Lewis will join a court that is majority female, with six women and three men, and includes a Latino justice, Steven Gonzalez, and the first openly gay and Asian American justice, Mary Yu.

Washington is one of 11 states, including Oregon, with majority female Supreme Courts, according to the National Center for State Courts."

Inslee first appointed Montoya-Lewis to the Whatcom County Superior Court in 2014. She was subsequently elected to the position. Previously, Montoya-Lewis served as chief judge for the Nooksack, Skagit and Lummi tribes. She has also served as a tribal appellate judge and taught at Western Washington University."

I'll give this general advice:

Don't trust any business that has a high turnover of feminine employees while the men stay on for long periods of time.

Just... that's a big red flag, y'all, and I know you go to the same places often enough to notice stuff like this. Try and notice it.

... A big (disgustingly oversized) colonist's head (kinda looks like one of those dudes they put on money?) getting walloped in the jaw, (we're talking a "knock the air out of em" wallop) by some kind of urgent expulsion of geology and oceanic magnitudes ...

A look at "precariously balanced rocks" (PBRs) and what they say about the recent geology of the area (i.e., "There be no earthquakes here recently.")